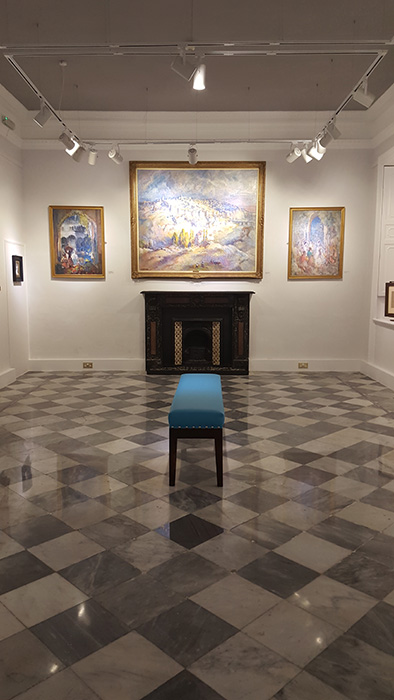 Summer hours Monday to Friday 8:30am to 3pm

On Fridays the Gallery closes half an hour earlier.

The announcement to name the National Gallery after Mario Finlayson was made prior to the opening of the venue by the Chief Minister, the Hon Fabian Picardo QC MP. This coincided with the launch of a retrospective exhibition, produced by Gibraltar Cultural Services in January 2015, dedicated to Mario’s artistic life, and works. Mario had campaigned tirelessly for years for the opening of a National Gallery to showcase the works of local artists. Mr Picardo explained Mario was most deserving of this honour not least as his work had inspired so many generations of artists.

The Gallery showcases the works by six deceased Gibraltarian artists who are considered the most renowned and prolific, our ‘Heritage Artists’: Gustavo Bacarisas, Jacobo Azagury, Leni Mifsud, Rudesindo Mannia, Elio Cruz and of course Mario Finlayson.

The Gallery has recently undergone a new curation which includes newly acquired works by the Gibraltar Government, the exhibition will also include works by the late Elio Cruz, whose works were not shown previously.

The Gallery is housed on the ground floor of the centrally located City Hall, a venue chosen due to its historical significance, beauty, and grandeur.

The building was originally built as a private mansion by Aaron Cardozo in 1819. He was a prosperous merchant of Jewish Portuguese descent who had settled in Gibraltar with the building becoming his private home. It was the grandest private mansion ever seen on the Rock, with the three-storey house dominating John Mackintosh Square.

The site had previously been the old hospital and chapel of La Santa Misericordia (English: The Holy Mercy), and later a prison. As a non-Protestant, Cardozo was not legally allowed to own property in Gibraltar. However, as a close friend of Lord Nelson and supplier to his fleet, Cardozo was eventually granted permission to build a house in the Alameda on the condition that it be “an ornament” to the square. Its cost was about £40,000.

After his death in 1834, the mansion was leased to John Ansaldo as a hotel, the Club House Hotel. It was bought in 1874 by Pablo Antonio Larios. He was a Gibraltarian-born wealthy businessman and banker, and a member of the Spanish Larios family. The family completely refurbished the building.

His son Pablo Larios, Marquis of Marzales (Master of the Royal Calpe Hunt for 45 years), sold the building to the Gibraltar colonial authorities in 1922, the intention being to turn it into a post office. However, it eventually became the seat of the newly formed Gibraltar City Council.

In 1926 the Gibraltar telephone service was operated by the City Council, and an automatic exchange serving the territory was installed in the then top floor of the building. The building was later extended to include a new storey and a new body to the North, modifying its original symmetry. Today, this historic building houses the Mayor’s Parlour and the National Art Gallery.

Leni at the Arts Centre