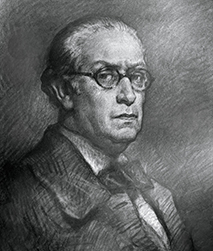 Gustave Charles Bacarisas was born in Gibraltar on 23rd September 1872, to parents Gabriel Bacarisas and Adela Podesta. He was the eldest of three brothers with  the family living in Castle Street. Educated at the Christian Brothers College in Line Wall Road, his talent was recognised at a young age, and Bacarisas was granted a scholarship to study art in Rome in 1892 at the age of 19. This was funded by a group of Gibraltarian businessmen, led by John Imossi.

In Rome he attended the Academia Española de Bellas Artes situated in San Pietro in Montorio. His painting style was Impressionist. He produced a “Self Portrait” (1902) depicting himself with a moustache and beard and he won first prize at an exhibition in Rome for a pastel portrait “Young Lady”.

He travelled extensively through Italy in 1905, participating in the International Exhibitions of Venice and Rome, and met the King and Queen of Italy who complimented him on his success. He then moved to Paris France, where he worked in Whistler’s former studio.

In 1906 he moved to London to continue his studies and exhibited at the Royal Academy with his painting “El Corso”, this work later won a prize in Barcelona and was eventually sold to an American connoisseur for one thousand dollars. His travels also included returning to Gibraltar to visit his family, and numerous trips to Morocco.

Bacarisas embarked for Argentina in 1910 and lived in Buenos Aires for a few years. After a successful exhibition in 1911 he was appointed professor in the Academia de Bellas Artes. From Argentina he travelled to New York, Philadelphia and other cities in North America where his exhibitions met with great success. He returned to Europe in 1914, again visiting Gibraltar and Morocco.

Gustavo settled in Seville and in 1915 participated in the Certamen Nacional de Bellas Artes in Madrid, as did José Cruz Herrera and José Gartner de la Peña, both notable artists from the Campo de Gibraltar. Art critic Fernando Periquet wrote that Bacarisas’ painting “Sevilla en Fiestas” was “perhaps the most commented on by the public in that exhibition”. On 13 March 1915 Her Majesty Queen Victoria of Spain and the Infanta Doña Beatriz visited his studio in Seville.

In 1919 he was made “Hijo Adoptivo de Sevilla” for his outstanding achievements, later appointed Honorary Professor of the Escuela Superior de Bellas Artes, and awarded the Gold Medal of the Ateneo de Sevilla. He was commissioned to design the unified “pañoletas” of the Royal Pavilion and also the plans for the new pavilion for the Feria de Abril of Seville, his overall design continues to be used to the present day.

Bacarisas travelled to Sweden, where in 1922 the Swedish Government commissioned him to design the sets and costumes for Bizet’s “Carmen”, for which he received several honours. Here Bacarisas met Elsa Jernas, a well known painter in her own right, who was to become his wife. Then in London Gustavo designed the sets and costumes for the ballet “Coppelia” that was staged at London’s Trocadero.

Bacarisas also worked in sculpture, chief among his bronzes being “Tanagra Andaluza” and “Busto de Gitana” (1919), and in ceramics, where he devised his special shade of blue. This shade, referred to as ‘Bacarisas blue’, is also seen in his painting, becoming his trademark.

He moved to Madrid in 1933. At the outbreak of the Spanish Civil War in 1936, he and Elsa returned to Gibraltar. Apparently, hundreds of his art works were unfortunately lost at this time.

In Gibraltar, Bacarisas created a set of five large scale gouache lunettes painted on canvas in 1937 for his family’s business, the Cecil Hotel, where he was staying. The lunettes depict Casemates Square in Gibraltar and other street scenes in Castellar, Jimena, Aracena and Tangier. He advised on the colour scheme for the Cathedral of St. Mary the Crowned and undertook the renovation of the Stations of the Cross. During this period he also travelled to Casablanca where he stayed in the spacious studio of his friend Cruz Herrera.

At the outset of WWII, he and Elsa were evacuated to Madeira in 1940, where they resided at the Savoy Hotel in Funchal. Once the war ended in 1945 they were repatriated to Gibraltar, after which they returned to Seville. In 1947 he was commissioned to design the centenary poster for the Seville April Fair.

In 1954 he was commissioned by the Legislative and City Councils of Gibraltar to create a painting of the Rock to present to Her Majesty the Queen during her visit to Gibraltar. After its presentation on 10th May 1954, the oil painting remained at Buckingham Palace until Sir Joshua Hassan, Chief Minister, requested the painting be loaned back to Gibraltar where it was displayed in the Royal Suite at the Convent. In 1988 approval was obtained for the work to be on permanent loan to the Gibraltar Museum. It is now exhibited at the Mario Finlayson National Art Gallery in Gibraltar’s City Hall.

In 1960 Bacarisas was appointed adjudicator for the First International Art Exhibition held at the Calpe Institute, Gibraltar. The Escuela Superior de Bellas Artes of Seville awarded him the title of Catedratico Honorario on 16th February 1961.

“In recognition of the eminent position he has attained in the world of art and as an expression of the high esteem which he is held by the citizens of Gibraltar”, Gustavo was appointed the first ever Honorary Freeman of Gibraltar on 15th June 1961. The ceremony of conferment took place in the Council Chamber of the City Hall on 3rd October 1962, led by His Worship the Mayor, the Hon Sir Joshua Hassan. The scroll of conferment was executed by fellow artist Jacobo Azagury and was contained in a casket made of local olive wood designed by Natalio Langdon.

On 7th January 1971 Gustavo Bacarisas died in Seville at the age 98. Following his express wishes, his widow presented a large oil painting of “The Mediterranean and Atlantic Fleets in Gibraltar Harbour” to the people of Gibraltar on 18th December 1971. This painting is displayed  in the Mayor’s Parlour (Council Chamber) at the City Hall.

In 1973 the Gibraltar Government decided to name one of the new blocks of flats at Glacis Estate after Gustavo Bacarisas. Similarly, there is also a street named after the artist in Seville.

His paintings also took pride of place in the Silver Jubilee Exhibition held at the John Mackintosh Hall, Gibraltar, from 6th to 9th December 1977.

208 of Gustavo’s works were shown at a retrospective exhibition in 1987, held at the Sala de Exposiciones of the Pasaje de Villasís from 5th to 29th November, organized jointly by the Fundación Avenzoar and the Obra Cultural del Monte de Piedad y la Caja de Ahorros de Sevilla.

In 1988 Seville introduced a new painting prize named after the artist, and as from 1990 the main prize at the annual Gibraltar International Art Exhibition is also named after Bacarisas.

The Ministry of Culture and the Vicerrectorado de Extensión Universitaria of the University of Cadiz In 1991 jointly organised a series of conferences which took place in Gibraltar in 1991. The brochure featured the lunette of Casemates created by Gustavo in the 1930s. One of the conferences, by Professor Fernando Perez Mulet from the University of Cadiz, on 14th May was entitled “Gustavo Bacarisas, la Pintura de un Último Romántico”.

An important exhibition of the works of Gustavo Bacarisas was held in the Sala de Exposiciones in Cordoba from 5th to 28th February 1997.

In June 2011 the Ministry of Culture organised a retrospective exhibition of Gustavo’s works. The exhibition was titled “Life and Legacy” and was held at Casemates Exhibition Galleries. After which these galleries were named the Gustavo Bacarisas Exhibition Galleries. The works exhibited were those in the Government of Gibraltar Art collection, others owned by the Gibraltar Museum, and many others loaned from private collections. A book catalogue depicting all the works, as well as his biography and timeline, was produced.

The Gibraltar Ministry of Culture currently endeavours to purchase any of his works that come up for sale.