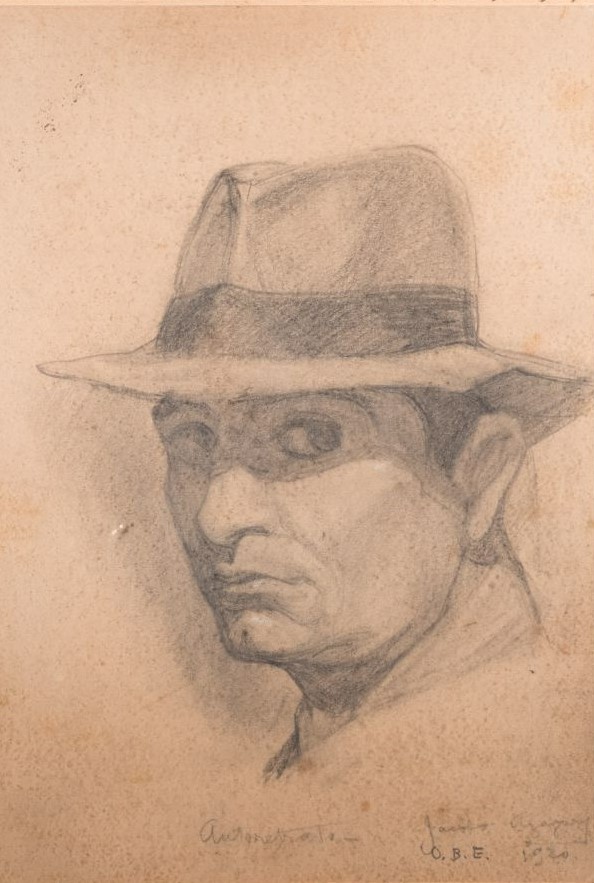 Jacobo Azaguri, later spelt Azagury, was born in Gibraltar on 12th June 1886 to parents Abraham and Simy. He died on 17th January 1980.

Passionate about art from an early age, Jacobo studied at the ‘Real Academia San Fernando’ in Madrid in 1915. He moved to Lisbon in 1923 to further his studies under Professor Cardoso y Veloso Salgada. The Professor was highly respected at the time, but when asked about his teacher’s influence on his art, Jacobo famously replied that his true teacher was in fact ‘Mother Nature and [his] love for mankind’.

Jacobo was Expressionist in style, and his works show his preoccupation with social conditions and moral ideals. Even in his landscapes he used a muted palette. Azagury tended to strip away the beauty and colour of nature, and reflected more on the unsavoury world of austerity and poverty. His subjects were mostly derived from the under-privileged of Gibraltar and Madeira.

He admired a number of artists such as Michelangelo, da Vinci and Rafael; and cited Velazquez, Goya and El Greco as being his main sources of inspiration.

During his career Azagury exhibited in La Linea, Jerez de la Frontera, Malaga and Granada in Spain; Tangier in Morocco; and Funchal in Madeira, where he was evacuated to from 1940 to 1944 during WWII.

Following his return to Gibraltar after the war, Azagury became a founding member of the Calpe Artists Society, highly encouraging and supporting up-and-coming artists.

He first exhibited in Gibraltar in 1952 at the Calpe Institute, and continued to show in a number of exhibitions in Gibraltar throughout his lifetime, the most prominent being in 1965 just after the John Mackintosh Hall was inaugurated.

Jacobo spent the last years of his life in the Jewish Home battling cancer. A tumour caused him to lose the vision from his left eye, but this did not deter him from continuing to paint. He was extremely close to his brother Solomon (Solly), a writer, who looked after Jacobo until his death.

As is the case with many artists, Azagury was regrettably misunderstood and under-rated during his life time. His notable contribution to the art community in Gibraltar was finally recognised only after extensive campaigning by members of the Calpe Artists Society, most notably by Mario Finlayson. Jacobo was awarded an OBE on the 30th December 1978, and was also posthumously awarded the Gibraltar Medallion of Honour in 2008 for services to the arts.

Woman looking out of Window

Sailors at a Bar ‘Royal Bar’