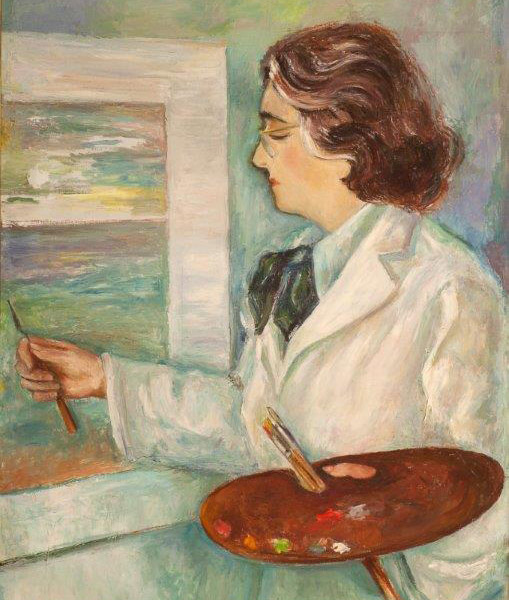 Elena Mifsud, more commonly known as Leni was born on the 17th December 1906, and died on the 7th January 1989. She was a self-taught Impressionist painter, inspired by Monet and Cezanne, the leaders of the Impressionist art movement in France.

Leni’s Impressionist style was born almost by accident. Following an argument with her sister, in her anger she applied the paint straight from the tube without mixing it with turpentine or oil, as would have been the normal process. Liking the subsequent result, she continued to paint like this for the rest of her career. Leni used oils, watercolours and pastels in her paintings and also worked with wood (carving), printing (wood blocks) and leather.

Leni demonstrated an artistic flair and a commitment to art from an early age. Her father was not supportive of her chosen career, perhaps not believing it to be a suitable or correct occupation for a young lady of her time. However his disapproval did not deter her, and she began using window panes as canvases, wiping away her creations when she has finished. She would use also use spare pieces of glass or timber that she found, to paint on.

She eventually studied sculpture and arts in the Colegio de Bellas Artes in Madrid in the early 1930s. Leni’s father agreed only to pay her railway fare to Madrid, but would not support her further financially. In order to fund her studies, she sold her car and began to sell postcards and frames and a few commissions. She was awarded a Spanish scholarship which also helped to fund her studies. She received rigid training in technique during her time at the Colegio, which she later adopted in her teaching methods in later life.

When her father died in 1936 Leni returned to Gibraltar. She could now fully demonstrate the rebellious and eccentric nature that she was known for: she cropped her hair, wore trousers and started smoking cigarettes, all fairly scandalous behaviour for a woman in that era.

In 1940 Leni was evacuated from Gibraltar to Madeira. Here she continued to paint and held an exhibition in Funchal in 1942. She also carried out work for the Church in the form of paintings of the Virgin Mary. Upon returning to Gibraltar from Madeira, Leni continued to work at her studio in Horse Barrack Lane. She began to give art lessons at the Calpe Institute in Main Street, and carried out restoration work, most notably to the Royal Arms above the Supreme Court.

Leni held a number of exhibitions at the Exchange and Commercial Library, the Arts Centre, and even in her own home. She branched out to galleries in Spain; in Cordoba, Alicante, Valencia and Almeria. In 1976 she was awarded the Governor’s Certificate and Badge of Honour. In 2005 one of the buildings in Edinburgh Estate was named after her in recognition of her services to art in Gibraltar. The third prize at the annual Gibraltar International Art Exhibition is named after Leni Mifsud, further acknowledgement of her contribution to the art scene.