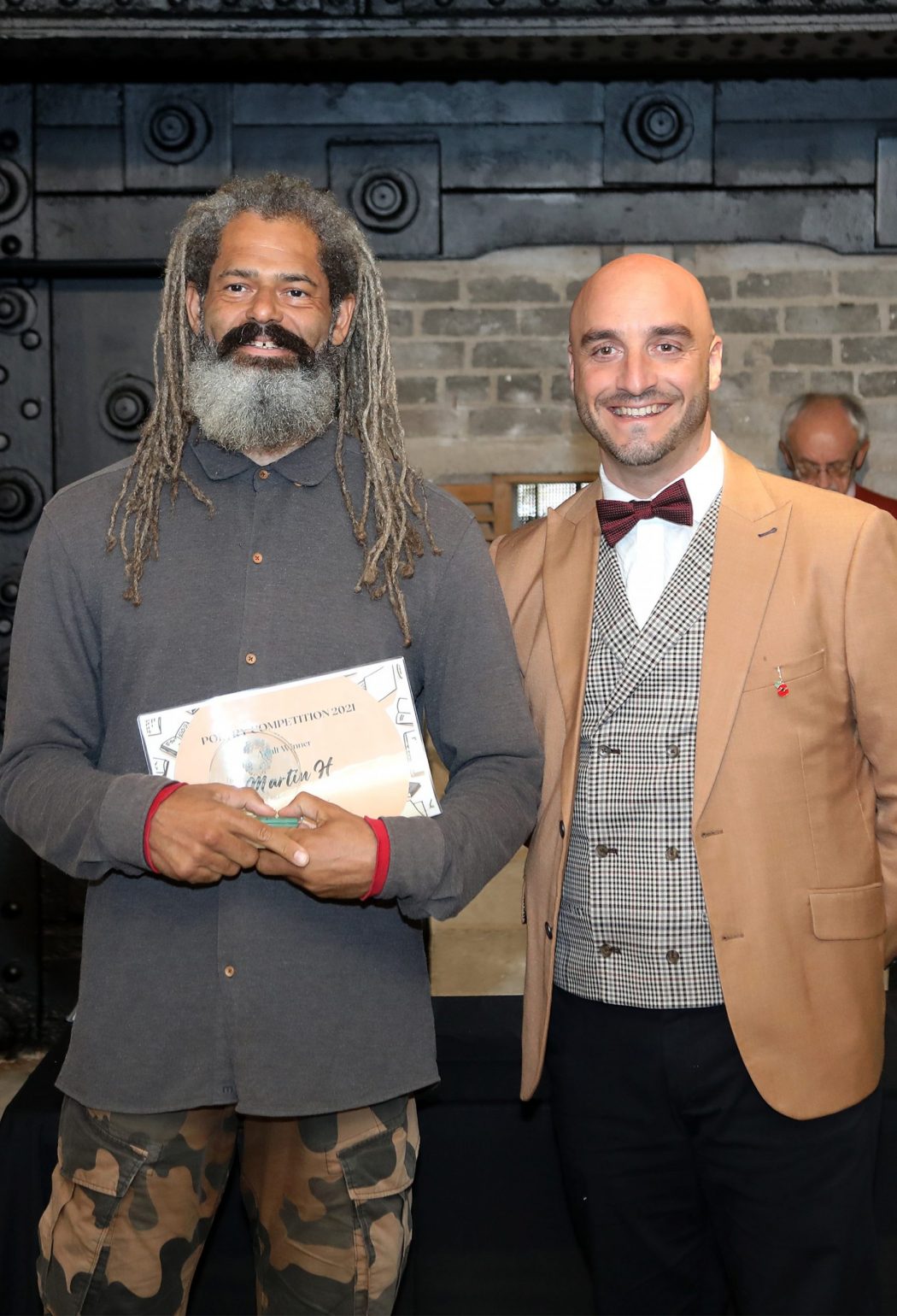 I can hear the rapid rat-tat-tat-tat!

And then the dreaded,

When I hear my neighbour – a handsome, youngish, asylem seeker immigrant from Pakistan (Living in the bottle)

I sit up to investigate:

Standing next to me like a pack of wolves

Lying in the foetal position, facing the wall, breathing heavily.

Ali’s silence is most unusual.

He comes into our cardboard-city usually

Effing and blinding, angry at something or someone

All I do is stare at this crime scene.

One policeman sees me looking,

Reminds me – with one practiced jesture using the middle finger –

To wear the mascarilla properly; over and ABOVE the nostrils.

I do as I am told. carry on staring.

That has had its fun,

The four policeman stride off into the night

Looking for the next mouse to play with

Oblivious to the harm caused.

Out on the prowl …

“Sadly, police brutality (we recall George Floyd’s agonisingly slow death in front of the cameras) is all too common.  H. Martin’s Like a Pack of Wolves encapsulates an episode when four callous Civil Guards, protected by their uniform and a repressive regime which rules by fear and the threat of violence beat up a poor, defenceless asylum seeker.  The first line with its reference to time, Ten P.M., focuses the reader’s attention, which is then drawn to the babble of voices, casual, inconsequential, sarcastic, a prelude to the unleashing of violence, ‘Thump, thump, thump.’  The words, ‘pack of wolves,’ ‘submission,’ ‘prey,’ ‘foetal position’ all point to a cruel world where human beings are regularly degraded, treated worse than animals, robbed of their dignity and reduced to a quivering mass.  Disturbingly, the speaker of the poem is also threateningly admonished to comply with the Covid-19 regulations. Ironically, the police themselves have created the crime scene: they themselves are the malefactors, the criminals. The last verse leaves us with a feeling of apprehension and despair- they are off ‘on the prowl’ again, looking for another, probably innocent, victim. The ominous atmosphere of this poem is almost tangible, frightening and fully credible.  It’s spine-chilling in its cold portrayal of man’s inhumanity to man. This is a very striking poem indeed.”

The Age of Invisible Monsters

That the Earth is getting warmer, tawnier,

arid and acrid; that icecaps and asphalt melt,

does not preclude those pleasant days felt

in more temperate times and climes.

secretes a second tune; of the silent ever-spring

in which all song should disappear, a harmony

growling and growing, until loud nothing rings

out and all around a bud-less grove.

Where once was roving nature, is over nature roved.

Two years have passed We think ourselves at the end

of sublime calamity. We watched as a sneeze breezed

its way around the world in weeks. We saw it upend

every institution in which we still believed.

Now, after so much lost, we think we’re winning.

Optimism is contagious too -this is only the beginning.

For the story remains the same: we know not what we do.

Though the stakes have changed -the rough beast differs –

each man is an island, soon to be swallowed by the blue

depths, in which dwell yet more unfathomable creatures,

too grand for two hands, or one mind, to conquer,

but for one vast coalition of the species,

along with all the other species –

a coming-together of familiar places

with those across the globe’s farthest reaches –

that should stand side by side and cry unified, ‘No.’

It is not too late. We can change. Together, we can grow.

“Climate change has recently acquired a prominence and profile as a news item which makes it impossible to ignore. The Glasgow summit reflects this process which has, at long last, been recognised as the deadliest threat to our planet.  James’ five six-lined stanzas convey a mature insight into how climate change, the seas warming up, storms regularly lashing our cities and shores, infection running amok, are transforming our perception of nature and highlighting our responsibility for maintaining a healthy ecosystem, which depends heavily on us to flourish and thrive.  A brilliant line, ‘we watched as a sneeze/breezed its way around the world in weeks,’ succinctly sums up the speed and havoc with which Covid-19 and other airborne infections wrought death and despair.  Individually we can do little to reverse the headlong plunge into entropy or degeneration. However, ‘a coalition of the species’ still has a chance to postpone the catastrophe and even make it change course. James has shown a commendable awareness of the global issues involved and the need for concerted action to save our wonderful planet from man-made destruction.”

The Eye of the Work

When I was young

In his lyrical grace;

In crafting the novel,

all other books, drivel;

There was nothing after

That hadn’t been done.

I thought myself cultured

Now the years have gone by;

And strangely I see

For they look back at me!

My hair’s getting thin

The signs are off-putting

There’s no use denying

That one can’t be living

If one isn’t dying.

By Larkin and Yeats

Were all along fated

To reflect my state,

Once the right time had come:

How the dull work becomes

But I’ve learned to move on

And I won’t try to hide;

As I take the long slide.

“This poem is a brilliant meditation for eggheads and culture addicts. In a highly literary poem, studded with learned references to modernist writers like Eliot and Joyce, the speaker looks at himself deprecatingly, with signs of premature ageing a reminder that life is a preparation for death. There is a refreshing dash of humour as the speaker sees himself scrutinized by the very art works he used to admire.  No longer a callow schoolboy, he now confesses his failure to appreciate the full import of poems by Larkin and Yeats.  Now they make ‘pregnant’ comments on his life experiences. At present the speaker seems to be in ‘the eye of the work’, the quiet centre in a raging storm, a time to reconsider and re-evaluate life, with the help of ‘companions’ (the poets he has mentioned?) as he takes ‘the long slide’.  A very clever, witty and amusing poem.”