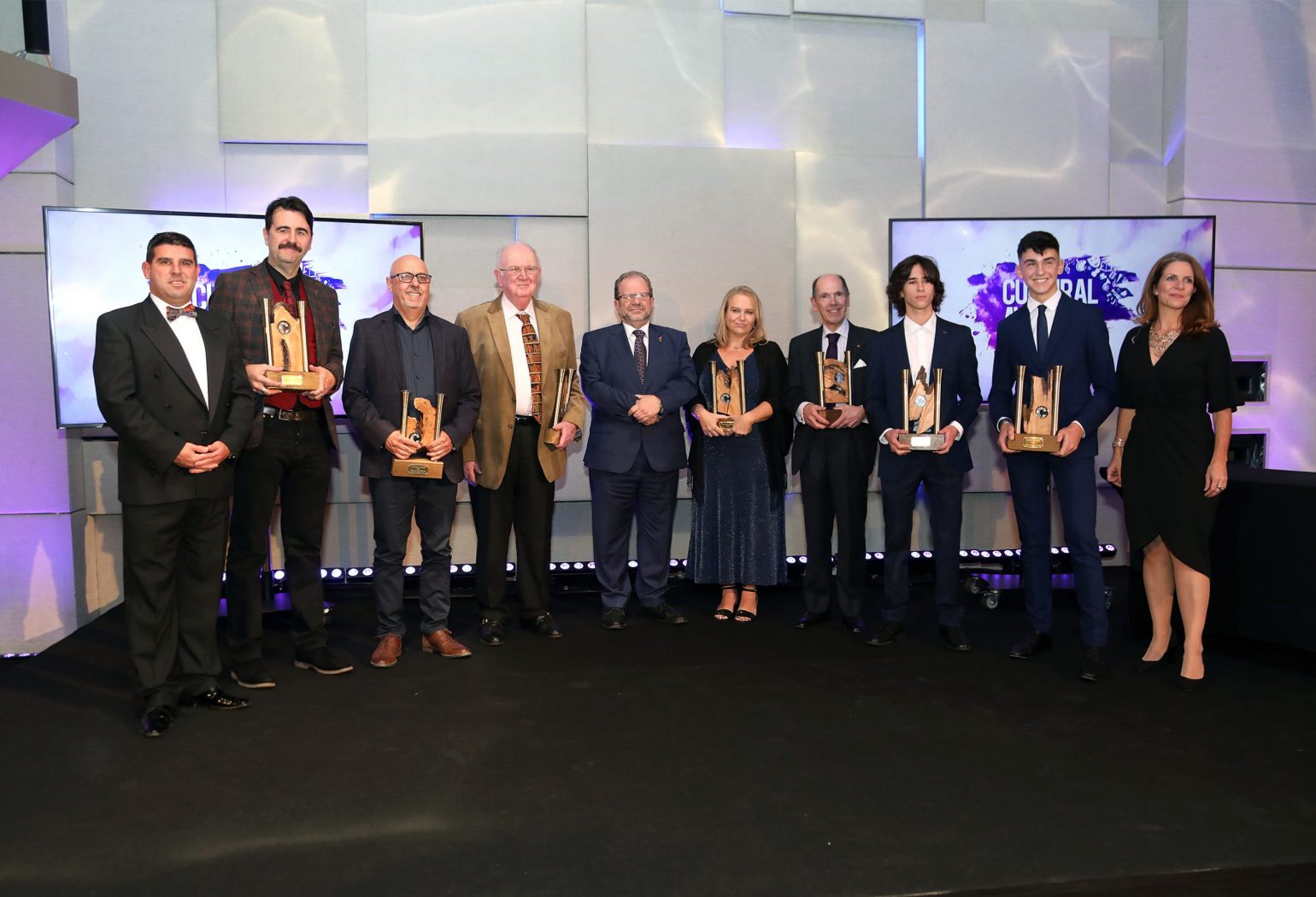 Gibraltar Cultural Services, on behalf of the Ministry of Culture have announced the results of this year’s Cultural Awards. The winners were presented with their awards at a glamorous event at the Sunborn Hotel, broadcast live by GBC.

The Awards aim to celebrate the best of Gibraltar’s arts and culture, looking at the achievements and successes of individuals and groups between July 2020 and June 2021. These awards recognise and highlight potential, ability, talent and achievement, whilst at the same time supporting the community’s artistic and cultural development.

The selection process included an open invitation to the public for nominations, which led to a shortlist approved by the Cultural Awards Board. The public was then invited to be part of the process and vote for the shortlisted nominees via a telephone vote set up by Gibtelecom. The Board also voted on awards for Cultural Ambassador and Lifetime Achievement with a Special Recognition Award also presented.

JUNIOR AWARD for Under 15’s – awarded to Gino Ochello 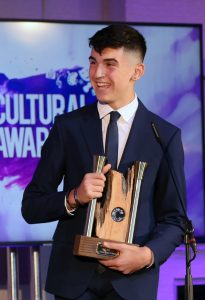 Gino was recognised as ‘Best Youth Actor’ at the 2021 Drama Festival, for his role in ‘The Exam’, presented by The Magazine Studio. This was Gino’s acting debut having previously focused on his singing both in the Gibraltar Youth Choir and as a soloist. In this latter capacity, this year he placed 3rd for both solo and duet intermediate, at the Festival of Young Musicians. Gino formed part of the GAMPA online programming during both lockdowns and featured in numerous Academy events. A promising student, with a bright future ahead.

YOUTH AWARD for Under 25’s – awarded to Darius Oliva 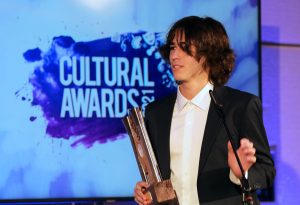 The 17-year-old won the top prize of Young Musician of the Year as a pianist at the Gibraltar Festival of Young Musicians, having been previously recognised with this award, on two other occasions. Described as a mature student who has blossomed into a fine concert pianist, his exemplary dedication has also seen him awarded the Parasol Foundation Scholarship for five years in a row, with funding provided until he attends university. Darius was also part of the GAMPA online programming during lockdown.

SENIOR AWARD for Over 25’s – awarded to Richard Garcia 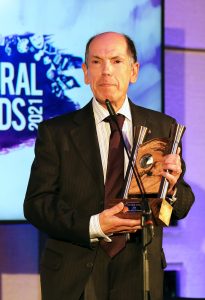 In the last year Richard published two volumes on Gibraltar’s social history, with the third underway. ‘Forging a Civilian Community’ and ‘Ordinary Life in Peace and War’, are based on Gibraltar, its people and culture and form part of a Trilogy, based on research the historian has been undertaking for around 25 years. Richard is also the current editor of the Gibraltar Heritage Trust Journal and participated in last year’s Literature Week. The historian also published a series of articles on the legacy of the Loreto Convent, to mark its 175th Anniversary. 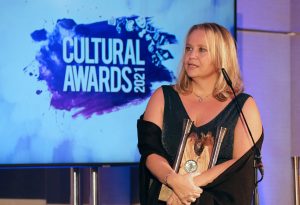 This local artist has brought her creativity to the streets through her murals raising awareness of environmental concerns. Geraldine has painted two murals. ‘Make a Wish’, located at the tunnel off Irish Town, the second ‘Touch the Earth Gently’ at the façade of the Department of Education on Queensway. In this latest one, Mother Nature can be seen blessing the Earth with her touch, the message that we need to look after our planet because every action carries a consequence. The site specific mural provides food for thought, that everything has a cause and effect. 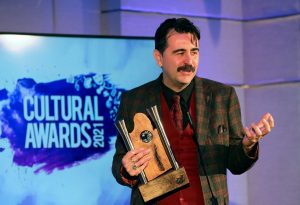 Singer, songwriter, lyricist and poet, this year’s Cultural Ambassador is fully dedicated and committed to the arts. Gabriel Moreno is a performer who is passionate about language and words, a full-time musician based in the UK, who makes a living through live events, gigs, touring and record sales. Having published more than 10 poetry books in both Spanish and English and lived and studied in numerous countries over the years, he has ensured his unique style and Gibraltarian stamp be felt, read and heard by varied audiences. His music currently takes centre stage with his latest album recently announced, focusing on artists’ struggles and their creative process in times of isolation, as he continues having an impact on the UK alternative scene. 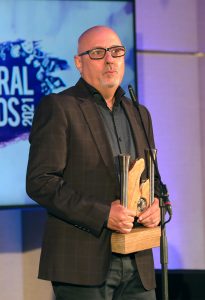 Michael Prescott has been recognised for his services to dance and his commitment and work with the Gibraltar National Dance Organisation, which celebrates its 40th anniversary this year. This milestone has only been possible through his dedication and passion, establishing the GNDO in 1981, and leading the organisation on the Rock for 30 years. His actions have seen Gibraltar grow from strength to strength as a dance nation, producing numerous world champions. The award pays tribute to Michael’s vision which has contributed to the development of dance on the Rock, raising standards and expectations, and ultimately creating a dance community which is focused, determined, competitive and passionate about what they do. 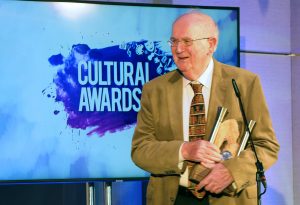 This Award recognises the work and efforts of writer and retired pediatrician Dr Sam Benady. An unassuming and humble individual who is passionate about Gibraltar and its history, Dr Benady has dedicated his free time to researching and documenting Gibraltar’s past through his writing. He has ensured that facts, myths, legends, and life stories are shared with the community. A member of the editorial board of the Gibraltar Heritage Trust Journal, he is one of the most prolific contributors, producing articles on a wide array of subjects for over 20 years. His interactive online blog ‘The Keys of the City’, which has been running for over 10 years, has ensured this information has been accessible to all. Described as a good literary craftsman, his fiction books and creative works are sure to stand for many years, inspiring others. His dedication to Gibraltar’s history and heritage through his writing is a tremendous gift not only to Gibraltar but worldwide for generations to come.

“The Cultural Awards are a recognition, not just of the achievements of those who receive them, but of the richness and standard of Culture in our community, and the calibre of all its players. I want to thank all who have taken the trouble to nominate, all who have voted, and the panel itself for supporting the Awards and in this way supporting Culture. Gibraltarian Culture continues developing its identity further, clearly demonstrated by its resilience through COVID times, and by how it has continued to be at the heart of the community throughout this time. I congratulate all nominees, and in particular the winners, young an old. As I usually do, I will specifically mention the winner of the Lifetime Achievement Award, Dr Sam Benady, who I have known for decades as a colleague in the health service, and as a neighbour, as well as for his dedication to history, heritage and literature.”