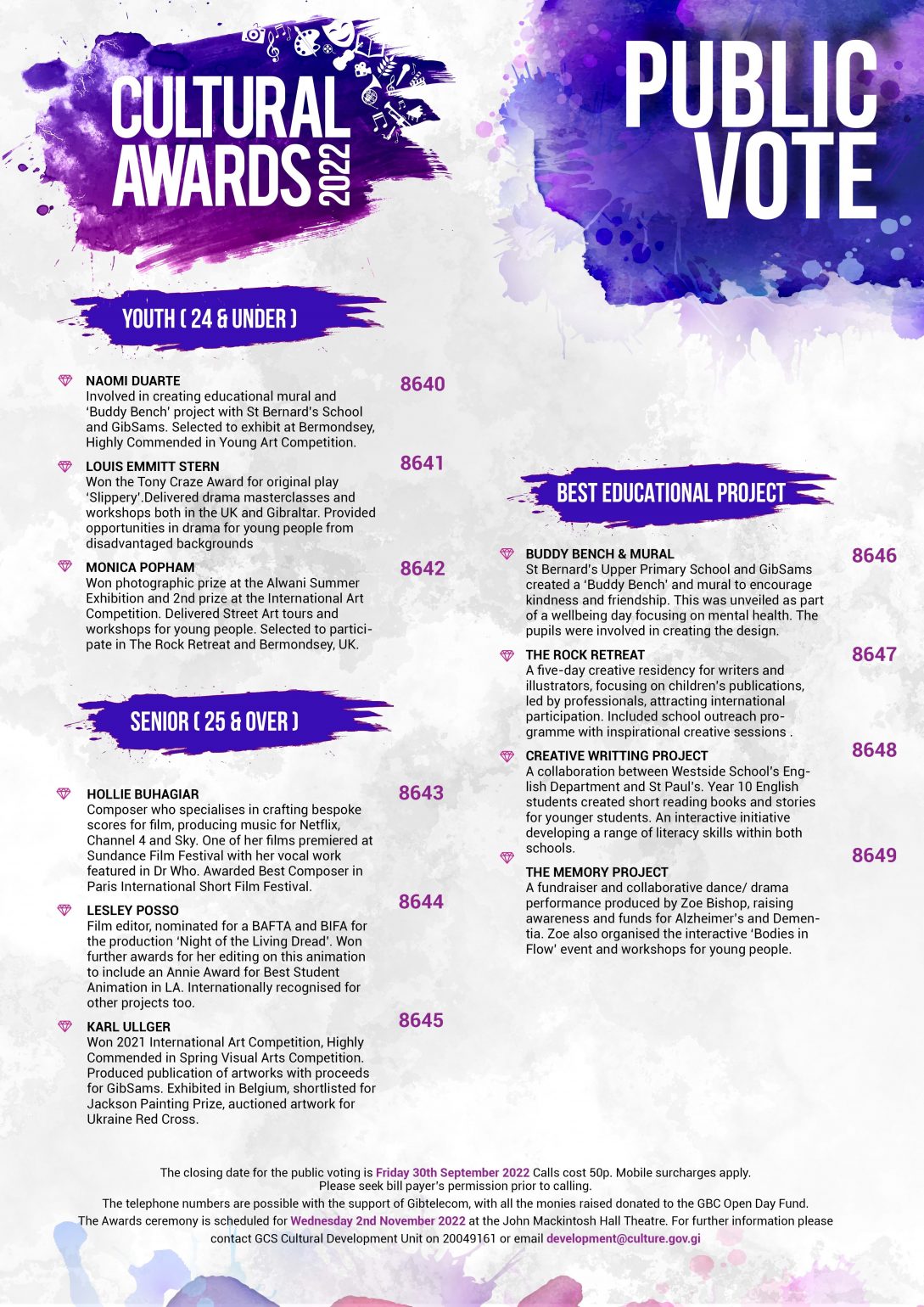 Gibraltar Cultural Services, on behalf of the Ministry of Culture, is pleased to announce that the public voting for the 2022 Cultural Awards will run between Thursday 1st September and Friday 30th September.

The telephone numbers have been set up by Gibtelecom and will be available for calls made by Gibtelecom landline and mobiles. All the monies raised will be donated to the GBC Open Day fund. The public is encouraged to vote for their preferred nominees, these votes will then be considered by the Cultural Awards Board.

The telephone numbers for public voting are as follows:

1. Naomi Duarte 8640
This artist has exhibited with Kitchen Studios, was instrumental in an educational mural and ‘Buddy Bench’ project with St Bernard’s School and GibSams and was also selected to exhibit at Bermondsey, London. Highly Commended in Young Art Competition.

2. Louis Emmitt Stern 8641
Won the Tony Craze Award for his original play ‘Slippery’. Delivered drama masterclasses and workshops both in the UK and Gibraltar. Worked with relevant industries to provide opportunities in drama for young people from disadvantaged backgrounds. Represented by ‘Berlin Associates’.

3. Monica Popham 8642
Delivered Street Art tours, workshops for young people and awarded 2nd prize at the International Art Competition, won the photographic prize at the Alwani Summer Exhibition. Selected to participate in The Rock Retreat and for the UK Bermondsey exhibition.

1. Hollie Buhagiar 8643
Composer who specialises in crafting bespoke scores for film, producing music for Netflix, Channel 4 and Sky. One of her films premiered at Sundance Film Festival with her vocal work featured in Dr Who. Awarded Best Composer in Paris International Short Film Festival and nominated for further international awards.

2. Lesley Posso 8644
Film editor, nominated for a BAFTA and BIFA for the production ‘Night of the Living Dread’. Won further awards for her editing on this animation to include an Annie Award for Best Student Animation in LA. Internationally recognised for other projects too, also receiving a Craft Skill Editing award.

1. Buddy Bench & Mural 8646
GibSams and St Bernard’s Upper Primary School collaborated to create a ‘Buddy Bench’ and mural to encourage kindness and friendship. This was unveiled as part of a wellbeing day at the school which included talks and activities highlighting the importance of mental health. The pupils were involved in creating the design.

2. The Rock Retreat 8647
A five-day creative residency for writers and illustrators, focusing on children’s publications, led by professionals, attracting participants from across the world. Included school outreach programme with workshop leaders delivering talks and leading creative sessions to inspire children.

4. The Memory Project 8649
‘The Memory Project’ a fundraiser and collaborative dance/ drama performance directed and produced by Zoe Bishop, raising awareness and funds for Alzheimer’s and Dementia. Zoe also organised other initiatives to include the interactive ‘Bodies in Flow’ event and workshops for young people.