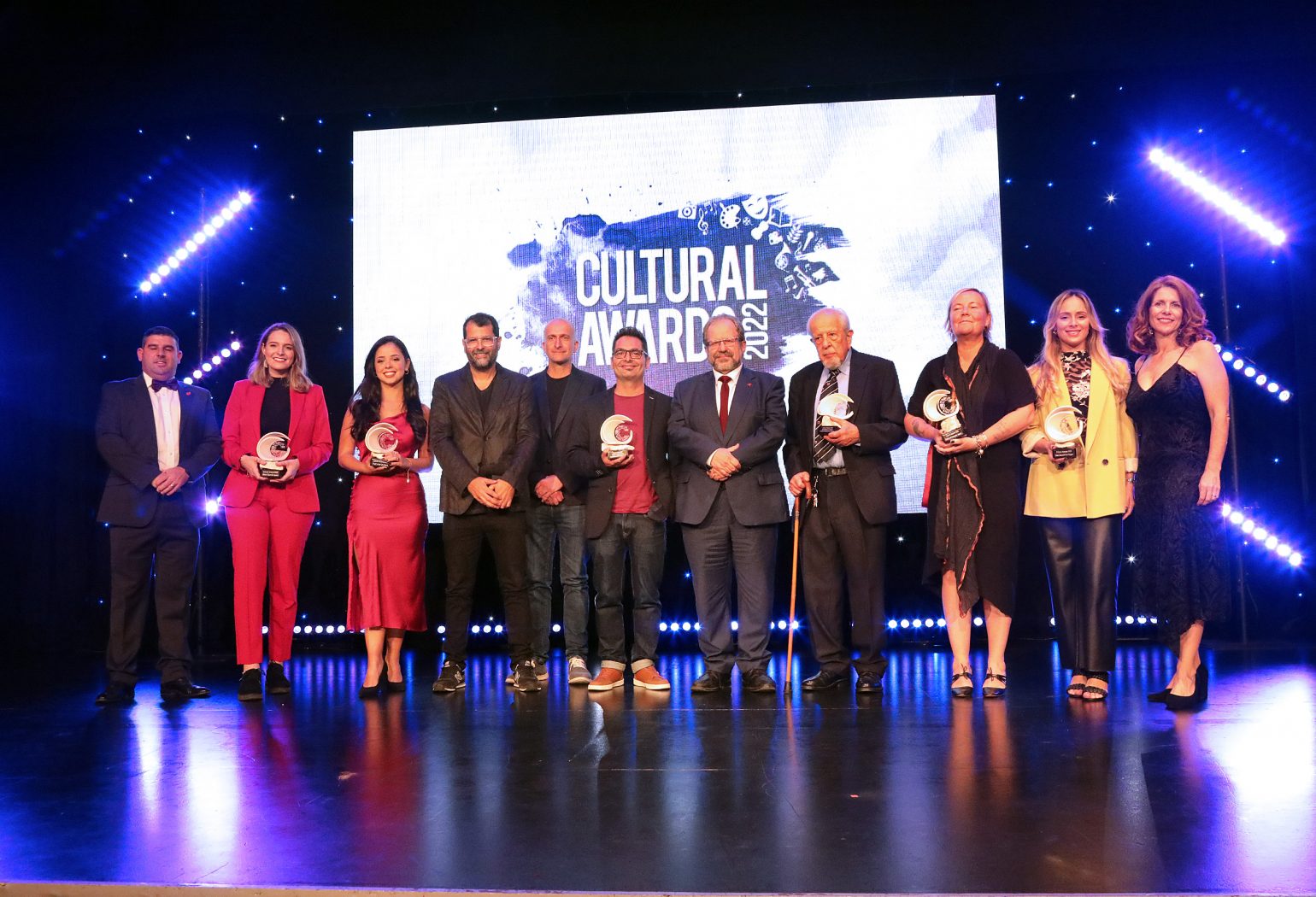 Gibraltar Cultural Services, on behalf of the Ministry of Culture have announced the results of this year’s Cultural Awards. The winners were presented with their awards at a prestigious event at The John Mackintosh Hall which was broadcast live by GBC.

The Awards aim to celebrate Gibraltar’s arts and culture, looking at the achievements and successes of individuals and groups between July 2021 and June 2022. These awards recognise and highlight potential, ability, talent, and achievement, whilst at the same time supporting the community’s artistic and cultural development.

The selection process included an open invitation to the public for nominations, which led to a shortlist approved by the Cultural Awards Board. The public was then invited to be part of the process and vote for the shortlisted nominees via a telephone vote set up by Gibtelecom. The phonelines and ticket sales for the Gala night will be donated to the GBC Open Day Trust and other charities. The Board also voted on awards for Cultural Ambassador and Lifetime Achievement with an Extraordinary Award also selected.

YOUTH AWARD (24 and under) – awarded to Naomi Duarte

Naomi Duarte combined her artistic skills and work with charity GibSams,to create a Buddy Bench and kindness mural for St Bernard’s Upper Primary School. The keen artist exhibited as part of Kitchen Studios in La Linea, received a Highly Commended at the Young Art Competition, represented Gibraltar at Bermondsey in London having also been recognised with top art prizes previously and the Alwani exhibition this summer.

SENIOR AWARD for 25’s and over – awarded to Lesley Posso

Lesley Posso has had success with numerous film editing projects with the animation short ‘Night of the Living Dread’ winning an Annie Award in Los Angeles, Best Animation at the RTS Student Awards and receiving nominations for a BIFA and a BAFTA. ‘Tease’ a documentary short, received the Best Student Documentary at the Grierson Awards and has now been bought by Channel 4. Lesley also completed editing a feature documentary which premiered in New Zealand’s Doc Edge Festival, winning its category too.

‘The Memory Project’ was a one-off thought-provoking production directed by Zoë Bishop raising awareness and funds for The Alzheimer’s and Dementia Society. It involved performers from different backgrounds in a collaborative dance/theatre performance interpreting the theme. Zoë also ran workshops for young people encouraging artistic expression through movement. In addition, her event ‘Bodies in Flow’ brought the artistic community together in an original interactive session.

The children’s book illustrator and artist who has made Gibraltar her home is a keen promoter of the Rock and is dedicated to generating cultural and artistic initiatives. The Rock Retreat was a concept spearheaded by Eleanor aimed at aspiring writers and artists with the focus on creating material for children and young adults. The intensive five-day residency attracted international participation from overseas territories and beyond, led by professionals from the literature industries. Participants used Gibraltar’s unique historical, geographical, and cultural identity as a fascinating environment for inspiration and discussion. The group worked from and explored different venues on the Rock visiting historical and cultural areas of interest. Her online presence continues to put Gibraltar on the map with plans to take the Rock Retreat to other places worldwide linking it to Literary Festivals and related events. Eleanor has also been involved in numerous educational developments and initiatives, always exploring different ideas to inspire and cultivate creative expression. Her mural work is further testament to this, with this proving popular with visitors and locals alike.

They are the most successful band to have come emerged from the Rock with their unique grungy rock style and llanito nature part of their sound and appeal. Dani Bugeja, Dani Fa, Dylan Ferro, Guy Palmer and Adrian Pozo impacted the Spanish music scene in the late 1990s/ early 2000 producing three albums and selling hundreds of thousands of copies. With their catchy melodies and heartfelt 3 lyrics, they produced relatable tracks which propelled them and their status. An iconic band that has left its mark on the music scene in Gibraltar and further afield with their songs resonating on the Rock and having an impact on a generation, with their music and influences still relevant today.

The lifetime achievement recognition is this year awarded to a historian whose dedication to documenting Gibraltar’s history and heritage has earned him an MBE, amongst other accolades. Tito Mesod Benady is being recognised for his efforts, research and body of work which includes the co-founding of the Gibraltar Heritage Journal where he maintained the role of Editor for over 14 editions. The publication has become an invaluable record of Gibraltar’s history through varied articles and subject matter. The historian also highlighted the importance of ensuring information is accessible and credible, setting up Gibraltar Books, not only as a local bookshop but also a publisher. He enabled material about Gibraltar to be published through an official channel and encouraged others to use the platform to do the same. He has since written over 100 monographs on the history of Gibraltar.

The Minister for Culture, The Hon. Professor John Cortes MP said: “The Cultural Awards are a recognition, not just of the achievements of those who receive them, but of the richness and standard of Culture in our community, and the calibre of all its players. I want to thank all who have taken the trouble to nominate, all who have voted, and the panel itself for supporting the Awards and in this way supporting Culture.

“Gibraltarian Culture continues to develop its unquestioned identity, clearly demonstrated by its resilience through COVID times, and by how since then it has experienced a resurgence in activity and quality in all its disciplines.”

“I congratulate all nominees, and in particular the winners, and if I may be permitted to specifically mention the winner of the Ministry for Culture Lifetime Achievement Award, Tito Benady. His lifetime dedication to the promulgation of Gibraltar’s Culture, History and Heritage, is most certainly worthy of this recognition. I know that he greatly encouraged and inspired me, personally, from a young age, as he has done many others.”