Street Art in Gibraltar is managed by Gibraltar Cultural Services on behalf of the Ministry of Culture. The initiative to decorate Gibraltar’s street in a creative manner is part of the urban regeneration programme focusing on the renewal and beautification of Gibraltar’s Old Town. There is a Street Art committee which decides upon proposals or requests applications for specific locations. This includes representatives from The Gibraltar Heritage Trust and several Government Departments including Town Planning. The programme is ongoing with new murals soon to be created, watch this space!

The Bacarisas series is based on one of Gibraltar’s Heritage Artists ‘Gustavo Bacarisas’ whose original works can be found at the Mario Finlayson National Art Gallery at the City Hall. These murals are the brainchild of Ronnie Alecio and Jupp, a UK Street Artist living in Gibraltar. The murals aim to depict characters from Gustavo’s Lunette series, showing everyday people at work or leisure. You can read more about the artist by clicking the ‘Art Heritage’ tab. 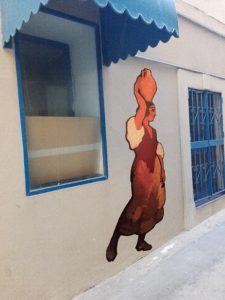 These murals are located at the Tunnel to Alameda Gardens by Grand Parade.The artist Paul Bush grew up in the same area and wanted to pay tribute to what the passageway meant to him as a kid. He highlights the connection to the Alameda Gardens, with recognisable landmarks and popular points of interest  depicted in the two murals, one a day scene the other a night scene, decorating both sides of the tunnel. Paul Bush is a Gibraltarian illustrator. He has designed prints for streetwear clothing for a collection by ‘Pestle & Mortar’, a Malaysian based company. 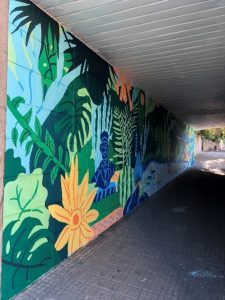 This mural at Prince Edward’s Gate, within the archway, was created by Eleanor Taylor Dobbs and Jessica Darch. The inspiration for the mural comes from the multi-layered history of Gibraltar. The artist aims to create a romantic landscape of ruin, defences and distant views within the small space, using imagery and symbols relating to Gibraltar’s military past. It is painted in sepia tones and has a strong narrative aimed at emotionally evoking the past, whilst making references to present day. The artists who finished their creation in two days, transformed the tunnel into an interesting passageway that is sure to keep the pedestrian entertained. 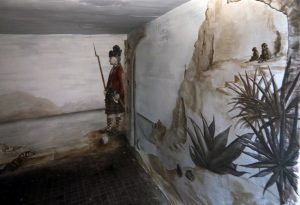 This mural kickstarted the Street Art initiative by the Government as part of the Urban Regeneration programme and can be found on the Ince’s Hall Theatre Building, 310 Main Street.
UK artist Ben Eine who had Gibraltar connections worked on the Ince’s Hall Theatre façade creating a bright and colourful mural which spells out the words ‘That’s Entertainment’, minus the apostrophe. The move sparked some controversy and debate at the time.
The artist described his style as happy graffiti with his distinctive typographic style dominating this creation. The London born artist is one of the most successful street artists in the world and is regarded as a pioneer in the exploration of graffiti letters with over 30 years’ experience. 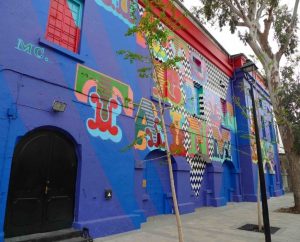 Touch the Earth Gently for all is Connected

This mural is located on the façade of the Education Department by Queensway off Commonwealth Park. The message behind this mural is that we are all connected. The artist wanted to create a ‘trompe l’oeil’ (deceive the eye) effect as if we have knocked down the wall of the building revealing a garden paradise. Mother Nature can be seen blessing the Earth with her touch, the message, that we need to look after our planet because every action carries a consequence. The mural aims to resonate with the actual park which it surrounds. The original design for the mural was tweaked slightly so that it now depicts a kingfisher and other species which are native to Gibraltar. Follow the artist online @geraldinemartinezart 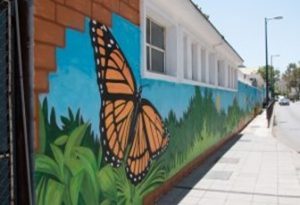 This mural created by artist Eleanor Taylor Dobbs is located at Fountain Ramp, next to the City Hall. The mural is a result of a collaborative illustration workshop between children in Gibraltar and  the artist. The aim of the workshop was to find ways of exploring the children’s ideas of hope and freedom, values embodied in The University Declaration of Human Rights. To find out more visit www.aboatcalledhope.com. Whilst you are here, you can visit the Mario Finlayson National Art Gallery for a collection featuring works on Gustavo Bacarisas, Jacobo Azagury, Rudesindo Mannia, Leni Mifsud, Mario Finlayson and Elio Cruz. 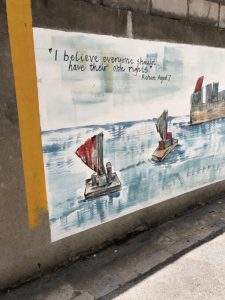 Artist Geraldine Martinez has decorated the tunnel off Irish Town connecting to Chatham Counterguard. ‘Make a Wish’ invites the viewer to leave behind the hustle and bustle of modern life and walk into nature’s paradise. Part of the mural in black and white represents the polluting industries and the impact these are having on the world. In contrast the mural transports you into a kaleidoscope of colour. A child (in a style not dissimilar to Banksy) transforms the mural and invites the passer-by to make a wish, as she blows hers, into a dandelion. 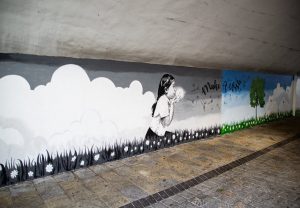 Local artist Monica Popham has decorated the Gibraltar Academy of Music and Performing Arts, GAMPA, building facade. It took the artist three weeks to complete this mural, working in the heat of Summer in 2020, and overcoming the challenges the site has to offer due to its location on a steep hill. The mural aims to represent the ethos of the Academy focusing on inclusivity, whilst celebrating the joy of music and performance. The motif is simple and colourful yet effective. You can follow the artist on Instagram @popham.studio 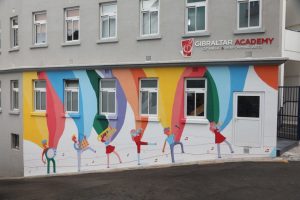